The shipping industry has completely changed over the last century.

Not too long ago, the current size and workload of the biggest ports in the world would be hard to even imagine.

With the continually improving shipping and loading technology, as well as the ever-growing size of container ships, the shipping industry is the backbone that keeps the world’s economies growing.

We begin this list in China, at the port of Tianjin.

And it probably won’t come as a huge surprise that China will dominate this entire list – as the world’s largest exporter, it supplies a large portion of goods worldwide, so it needs a range of robust ports to handle the continuous workload.

Tianjin is an integral part of that web of ports, as it serves as a connecting hub of various waterways to and from Beijing, the capital of China.

According to 2016 data, it handles around 7.18 million TEUs (Twenty-Foot Equivalent Unit, basically meaning a cargo container) per year and the estimated value of the daily cargo that goes through the port is valued at around 500 million dollars.

What’s more, the port stretches for over 130 miles across the coast, which is a number that is impressive even when discussing the largest container ports in the world. 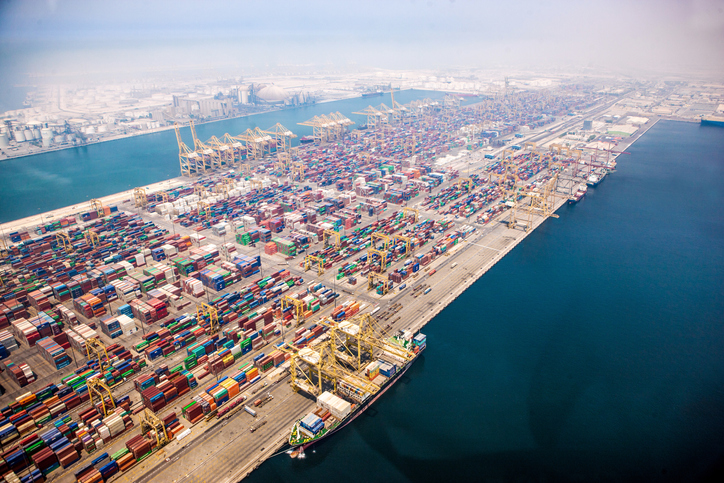 Although the majority of the world’s busiest ports are located in China, there are exceptions, such as the Port of Jebel Ali, located in Dubai, United Arab Emirates.

Completed in 2013, it has since become the biggest and most important port in the region, handling almost 15 million TEUs per year, and is heavily used by both commercial companies and the military, including the U.S. Navy.

The port is an engineering marvel, as it is the largest man-made harbor in the world, stretching over an area of over 134 square miles.

The current expansion of the port cost billions of dollars and helped propel the port into the position of the leading trading hub in the Middle East.

Qingdao may not be the world’s busiest container port, but it is undoubtedly one of the most historical – it has been the gateway of Bohai Rim and Yangtze River Delta regions, connecting them to the rest of the world since the 19th century and helping to propel the growth of the region for a very long time.

And the port is impressive in terms of size as well – it handles around 18 million TEUs per year, and ships to more than seven hundred ports all over the world.

The port of Guangzhou is yet another impressive port operating in China, and over the past few years, it has been on a rapid upward growth trend that could position it to climb even higher on this list in the coming years.

The port handles around 19 million TEUs per year and is incredibly important to both local and international trade in the region.

Port of Busan is the largest port in South Korea, operating in a huge metropolitan city of 3.5 million people, and serves as the third-largest transshipment handler in the world.

It plays a huge role in South Korea’s economy, so the government recently started a massive expansion project, committing more than 13 billion U.S. Dollars to try and grow the port even bigger than it is today, despite the fact that it already handles 19.5 million TEUs per year.

With nine robust container terminals along the basin, Hong Kong port helps connect the region to hundreds of ports around the world and is renowned as one of the best ports in the world for the past few decades.

With around 20 million TEUs handled per year, the port of Hong Kong is poised to remain a candidate for the title of world busiest container port, and should probably be higher on this list based on its importance to shipping worldwide.

The result of the merger of Ningbo and Zhoushan ports, the Ningbo-Zhoushan port is firmly established as the third-largest port in China and is ideally situated to connect with hundreds of ports all around the globe, maintaining its status as one of the busiest shipping ports in the world.

The port handles an astounding 23.3 million TEUs per year and continues to build on the rich history of success achieved by the Ningbo port, which has been operating since as early as 8th century A.D.

At the very heart of the Guangdong province coastline, the Shenzhen port is a collection of smaller ports that play a vital role in servicing the needs of the Pearl River Delta and the surrounding areas.

But even though it is a bit more local, don’t let that fool you, the port still handles almost 24 million TEUs per year and is sitting comfortably in second place among China’s ports and is not too far from being the world’s busiest container port.

For a long time, the port of Singapore held the top spot on this list and was the busiest port in the world, and was only overtaken in 2010.

It connects to over 600 ports in 130 countries worldwide and handles almost 31 million TEUs per year, and is especially well-known for its ability to store vast amounts of refrigerated containers at once.

Since so many ports on this list are located in China, it only makes sense that the country’s port should hold the title of being the world’s busiest container port.

It processes a hard-to-comprehend 37 million TEUs per year and has an average daily cargo value of more than one and a half billion U.S. Dollars, spanning over an area of more than 2,200 square miles.

These types of numbers can make your head spin, but the truth is, Shanghai port continues to grow, and will likely hold its place at the top for at least the near future.

If you want to learn more about the containers that are shipped through these ports, as well as how these types of containers can be customized and turned into a storage facility, an office, or even a home, reach out to Conexwest. We have years of experience and have served over 10,000 clients in the U.S. and can help you realize any container project you might have.

We are open Monday-Saturday 7am-6pm